Some may call it coincidence. Still others say things like this are divine. It’s certainly a “blessing in disguise” when you look at the 2020 story of Hudson Sapp. The Ole Miss signee was primed for a monster year, and even through a short season in which he battled through a serious illness, the senior earned Player of the Year honors to go back-to-back. This is straight up Roy Hobbs-esque. Don’t know about Roy Hobbs? Check this out!

What most would look at devastating – losing your senior year to the COVID situation and seeing all your hopes and dreams go up in smoke, Sapp can look back at the shortened season as life-changing.

Many did not know, but Sapp played the entire season with a severe illness. Leading up to his senior season, he was hitting the weight room hard and noticed that he was shedding weight at a quicker and higher rate than normal.

“I was just all of a sudden losing weight really really fast,” says Sapp. “It went from a little bit of weight to 28 pounds in just three weeks. I was working out like normal, doing the same normal routines, eating everything normal. We knew something wasn’t right.”

His family consulted doctors, who didn’t know if it was mono, a thyroid issue, or even diabetes. As the season drew close to starting, the doctors diagnosed Sapp on January 17 with Graves Disease, a thyroid disease that his family later learned was hereditary. While his uncle and others had the “hypo” level, Sapp had the more rare “hyper” version, causing him to shed weight and suffer mood swings, rapid heart rate, fatigue, blurry vision, and excessive sweating.

“The thyroid is like the battery that runs your body,” adds Sapp. “I’ve always been a solid-built kid, and have been hovering around 193-195 pounds, and at the time was up at 198. The way I described it to my family and the doctors, was it was like putting a vacuum in your body and sucking out all the muscle. I went from 198 down to 170 in three weeks. It was really scary at first, because we didn’t know what it was.”

After getting on medicine to treat the disease, Sapp was all in for 2020, despite conversations about maybe sitting out the year. However, while his numbers showed success to most, he was frustrated more often than usual.

“It was tough,” says Sapp. “It took a couple of weeks for the medicine to kick in and make me feel somewhat better. I started getting my weight back, but my strength wasn’t there – it still isn’t, but it’s close. My body changed, but my mentality was still the same. I had these expectations to hit over .600. I was lacking some power and tools I had previously, and my swing had developed some bad habits with the muscle loss.”

Battling the illness was tough, even right out of the gate.

“The first practice, I was doing outfield drills and had to take a break after five minutes,” says Sapp. “I was dizzy and out of breath. Here I am a senior; the kids look up to me, and I couldn’t lead by example.”

His teammates knew of his diagnoses, therefore knowing why Sapp looked and acted a little bit different. Sapp says most people had no clue outside family and teammates. A week before the first game, Hudson and dad/coach Dwayne Sapp considered not even playing the year out.

“I knew in my mind though, I can still go out there and perform good enough to help the team win.”

“Right around the end of the season is when I was starting to feel more like myself,” states Sapp. “Earlier games, we just had to monitor it. Double headers were harder than usual, my energy level would be way down. I didn’t steal as many bases as normal, and I could run ten yards and my breath was just gone. It took everything out of me just to practice.”

The medicine began to help change that, but the rude interruption of the coronavirus pandemic shut the season down across the country and world. There was much that everyone lost, including special goals and aspirations, like Hudson’s goal to get his dad to 500 career wins. He’s now at 497.

This is what the term blessing in disguise is all about.

“We elected to have surgery on April 3 to remove the thyroid,” says Sapp. “We were debating whether to just stay on the medicine, but something was telling me to do the procedure. They removed it and sent it off to pathology. The doctor called, and they said there was cancer in it. I was like ‘Wow, well that’s a blessing that we went this route.’ Like wow…really….”

Anyone would be a loss for words, and Sapp knows that had he stayed on the medicine and the season had still continued, perhaps this latest revelation would have stayed hidden.

“I’m so glad I got the surgery done and got it out of me and don’t have to worry about this later down the line,” he adds. “Yes I got diagnosed with this, yes it sucked, but I always knew it could be worse. This experience humbled me and strengthened me. My dad did a lot of praying that the best situation would come out of this. I’m very thankful for it. I might not have done what I wanted to do, but later on down the road, I’m able to say that I benefited from this more than it hurt me.”

Safe to say, this cloud had a silver lining, the Sapps made lemonade out of lemons, and insert any other cliche here.

“I should be 100% by the time I get to Ole Miss,” says Sapp assuredly. “I feel back to myself almost completely. I’m still just battling some habits my swing developed since I couldn’t generate that previous amount of power at first. Just some little things, but for the most part everything is back to normal.”

Sapp believes that whoever works hard is going to make it. Based on his work ethic, he’s going to soar in Oxford.

The numbers are mind-boggling, even in a short season. To imagine what Sapp could have done with a full season and healthy…that’s scary. He hit .500 with 5 homers and 18 RBI, scoring 18 times while swiping 7 bases and drawing 18 walks. And on the mound, the lefty was 3-1 with a 1.77 ERA and 30 strikeouts in just 17.2 innings of work. His .086 average against is just insane, as is the .849 WHIP. He tossed a perfect game against Coosa as part of his memorable 2020 season.

***No sympathy here…most of the voters on our panel, nearly all of them, had no clue of Sapp’s diagnosis while voting took place.

HISTORY OF BASEBALL PLAYER OF THE YEAR

Hudson keeps it in the family with now three years as a Sapp winning. In fact brother Palmer wore #3, and Hudson took on that same number when Palmer graduated.

“My brother won it before me,” says Sapp. “We talked about it the other day, and whoever puts on that #3 at Dawson has to win it to make it four in a row.”

We’d say Aidan Berrong (Towns) should have a great shot, as he’s one of only two finalists returning, along with Jefferson’s Mason Cooper. Plenty of other great players that will make a run at this, including someone from Banks, Habersham, Commerce, etc. 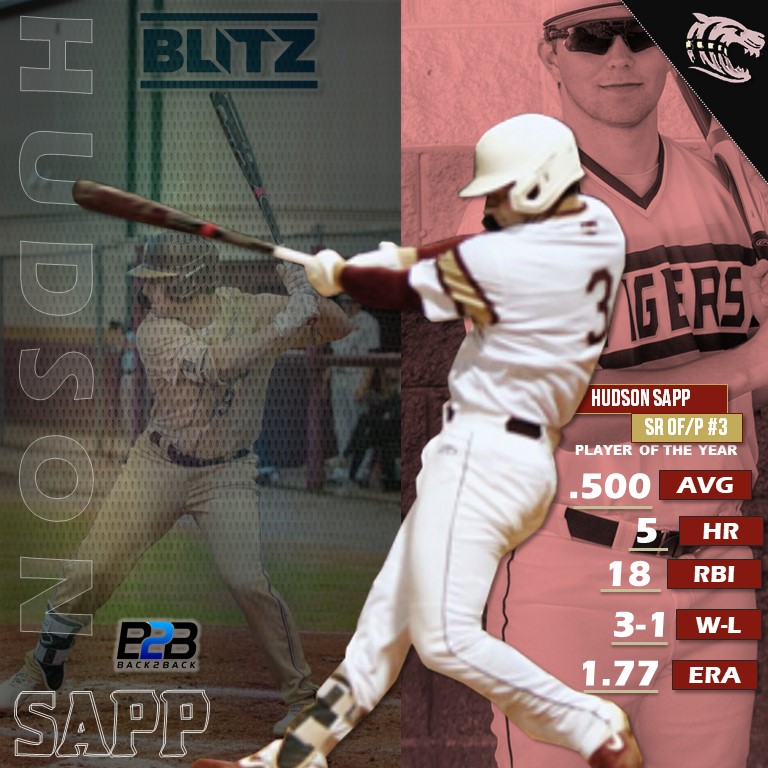