Just as the weather changes, so do the sports seasons. Still some of our teams are playing in the football state playoffs, but many schools have turned their focus to the hardwood. Here are the official BLITZ Pre-Season Boys Basketball Power Rankings. 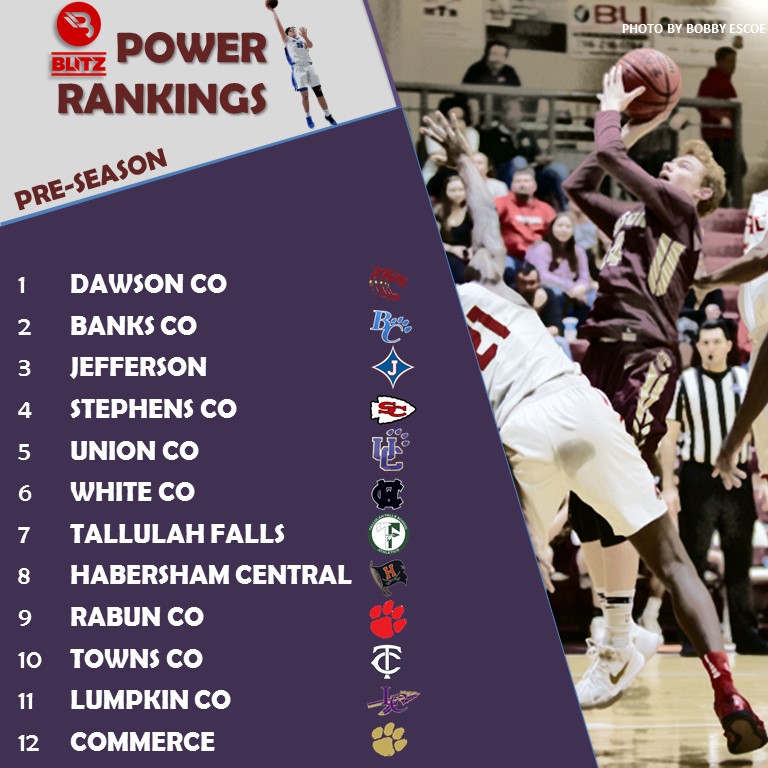 HEAD COACH: Chad Pittman, 3rd Season
2017-18 RECORD: 19-10 (8-4)
REGION/PLAYOFFS: 7-AAA Runner-Up / 3A Sweet 16
KEY LOSSES: Jeremiah Crumley (1,000-pt scorer), Cullen Reed (1,000-pt scorer), Ryan Gallenkamp
KEY RETURNING PLAYERS: Campbell Reed, Trey Pruitt, Luke Chism (Dawson Christian Academy transfer) Jasper Gibson (Jefferson transfer), Ahmad Kamara (DCA transfer), Eli Burruss (DCA transfer)
OUTLOOK: Perhaps no team in Georgia can withstand losing a pair of 1,000-point scorers the way Dawson County can. There is some extreme fortune here with the additions of FOUR transfers following the closure of Dawson Christian Academy and Jasper Gibson moving from Jefferson. The Tigers open the season ranked #6 in the state and now have Pre-Season All-State (6’5″) Luke Chism, Gibson (18.7 ppg; All-Region for Jefferson last year), Ahmad Kamara (who will miss some time as the football team makes a deep run and Burruss (6’5″). Campbell Reed and Trey Pruitt also return from last year. This team is loaded, at least for this year. Of the four transfers, Chism and Kamara are seniors, so it’ll be fun to see what the Tigers can do with one year of this group.

OUTLOOK: There was a LOT of turnover this offseason with Dylan Orr,  Darius Bonds and Gabe Martin all graduating. That was a triple-double Player of the Year, an incredible ball-handler with unmatched passing abilities, and a three-point wizard. That trio stretched the floor. The loss of Bosko Norman (the heir apparent of Darius Bonds) to Cherokee Bluff was a major blow, as he was a star in the making. However, with Carl Cleveland back to anchor the team along with Dakota Orr, who might just be the best Orr yet, and Wes Ledford back as well, this starting lineup should be pretty good. Someone will need to take the role of Martin as the 3-point machine, and someone needs to emerge to run point. We could see growing pains early until these guys get in a rhythm.

HEAD COACH: Kevin Morris
2017-18 RECORD: 18-11
REGION/PLAYOFFS: 8-AAAA Runner-Up / 4A Sweet 16
KEY LOSSES: Jasper Gibson (transfer to Dawson)
KEY RETURNING PLAYERS: Jacob Radaker (9.6 ppg), Donsha Gaither (9.1 ppg), Daniel Parker
OUTLOOK: The Dragons lose Jasper Gibson to Dawson County, and he was by far the most electric player on the team, leading in points (18.7), assists (2.3), steals (1.2) and a solid rebounder (3.4). However, the four seniors from last season were good leaders but weren’t getting the bulk of the playing time, as juniors Donsha Gaither, Jacob Radaker and Kaniel Parker will lead this group in 2018-19. This is still a young team, and moving down from Class 4A to 3A should prove interested in Region 8-AAA.

HEAD COACH: Chad Bridges, 8th Season
2017-18 RECORD: 21-9 (6-4)
REGION/PLAYOFFS: 8-AAAA 3rd / 4A Sweet 16
KEY LOSSES: DeUndra Singleton (1,000-pt scorer), Chaz Bridges, Montavis Thornton
KEY RETURNING PLAYERS: Ty Nails (17 ppg, 8 rpg)
OUTLOOK: The Indians graduated eight seniors last year…that’s insane. The youth on this team is great, but the athleticism is even better. However, this team will go as far as Ty Nails (6’5″) will take them, as he is one of the most dynamic players in the area and is now a senior. There is no DeUndra Singleton (6’8″) as he graduated so it will be interesting to see how these guys grow quickly. Many of their young, talented stars play football, so it may take a little while for them to transition before we see the real Indians take form.

HEAD COACH: Casey Jones, 6th Season
2017-18 RECORD: 16-9 (5-7)
REGION/PLAYOFFS: 7-AAA 5th / No Playoffs
KEY LOSSES: Crawford Colwell (1,000-pt scorer), Patrick Baggett, Candler Colwell
KEY RETURNING PLAYERS: Pierson Allison (12 ppg), Sawyer Drake (13 ppg, 6 rpg)
OUTLOOK: The Panthers are primed for a big season with the return of Pierson Allison and Sawyer Drake. They do lose some talented seniors, but also playing up in 3A the last two years has helped, and now that Union is back in 8-AA, it will be interesting to see how close it is to the level of Elbert County and Banks County.

HEAD COACH: Wade Mawdesley, 1st Season
2017-18 RECORD: 14-13 (4-4)
REGION/PLAYOFFS: 7-AAAA Runner-Up / 4A Rnd 1
KEY LOSSES: Clay Dockery (12 ppg), Austin Rowland
KEY RETURNING PLAYERS: Austin Harris (14 ppg), Jay Lepkoske
OUTLOOK: The Warriors will be young in 2018-19, and will count heavily on Austin Harris and Jay Lepkoske. That gives a solid one-two punch, but who will be the new faces to emerge this season? It’s no longer a small region, so White County will have its work cut out to make the playoffs in a region that may be pretty stacked.

HEAD COACH: Jim Van Hooser, 3rd Season
2017-18 RECORD: 14-13 (9-6)
REGION/PLAYOFFS: 8-A 5th / 1A Private Rnd 1
KEY LOSSES: Tahj Moss (1,000-pt scorer)
KEY RETURNING PLAYERS: Matthew Weidner (17 ppg, 7 rpg), Sebastian Herrera (6’6″)
OUTLOOK: Losing a Tahj Moss hurts, but Matthew Weidner only being a junior and coming back is HUGE. Speaking of HUGE, Sebastian Herrera is just that at 6’6″. Can he put up a monster senior year to help alleviate some pressure on Weidner? Who will run the point and who will be that outside shooter? Many questions, but many athletes to answer them.

HEAD COACH: Brandon Hutchins, 1st Season
2017-18 RECORD: 6-20 (1-9)
REGION/PLAYOFFS: 8-AAAAAA 6th / No Playoffs
KEY LOSSES: 8 seniors, including Bryce Tanner, Caleb Hodges, Cooper Roland, Jim Barnett, AJ Curry, Karl Fail
KEY RETURNING PLAYERS: Caleb Gaines, DonDon Bailey, Donovan Curry
OUTLOOK: It’s always hard to tell with this team, as its now had three head coaches in as many seasons, and playing in 6A hurts badly. There is plenty of talent in football stars DonDon Bailey and Donovan Curry, as well as senior point guard Caleb Gaines. We’re not 100% sure if Bailey and Curry will play their senior year in basketball or not (as some choose not to in order to protect themselves from injury). New coach, same region, new lineup…will we see new results?

HEAD COACH: David Adcock, 1st Season
2017-18 RECORD: 6-20 (5-7)
REGION/PLAYOFFS: 8-AA 5th / No Playoffs
KEY LOSSES: Tevan Dixon (1,000-pt scorer), Grayson Lane, Bailey Fisher (didn’t play much in ’17-18)
KEY RETURNING PLAYERS: Cameron Lovell, Braxton Hicks (maybe), Jon Sego, Chase Buchanan, Kasin Old
OUTLOOK: This will be a new-look Rabun County team, as they move on from a trio of seniors last year that were pretty good. This roster is still getting rounded out under first-year head coach David Adcock, who has been at Rabun for awhile now. Will Braxton Hicks be back? He is starting to get tons of D-I football recruiting attention, so sometimes guys like him step back from their “secondary” sport, just as Bailey Fisher did a year ago so he could go to Tennessee Tech early. There are playmakers on this roster, but Rabun will need someone to step up and take the charge as the leader on this young team.

HEAD COACH: Rob Benson, 4th Season
2017-18 RECORD: 12-14 (6-9)
REGION/PLAYOFFS: 8-A 7th / No Playoffs
KEY LOSSES: Zach Davenport (1,000-pt scorer), Logan Cowart
KEY RETURNING PLAYERS: N/A
OUTLOOK: It might be tough going without Zach Davenport and Logan Cowart until this team grows a good amount. The past two seasons featured some of the best to come through Towns County in quite some time. That foundation helps make this a team that can continue to build off that and make winning a habit.

HEAD COACH: Jeff Steele, 4th Season
2017-18 RECORD: 3-21 (2-10)
REGION/PLAYOFFS: 7-AAA 7th / No Playoffs
KEY LOSSES: Austin Brooks, Austin Black
KEY RETURNING PLAYERS: N/A
OUTLOOK: Jeff Steele’s first two seasons were awesome, as he compiled 33 wins and two state tourney appearances, including a Sweet 16 run. Last season was a full rebuild, to the tune of a 3-21 record. The good news is that team had two seniors, so this year’s group will be mostly intact. There are five seniors returning per our best guess of the final roster. Someone will need to step up big to get this program back on track.