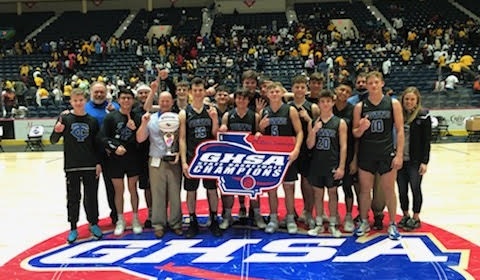 Towns County took on defending state champions Hancock Central in Macon on Saturday, and claimed the school’s first-ever state championship with a 64-60 historic win. The Indians were led by Jake McTaggart, who finished with 22 points and 12 rebounds in the win.

Towns County (25-3) led nearly the whole game. The Indians led 14-13 at the end of the first before a buzzer-beating 3-pointer made it 16-14 Hancock. From there, the Indians went off with a big second quarter. A 10-2 run put Towns up 24-18 midway through the second quarter, and that led to a 31-24 advantage going into the break.

Through the first half, Hancock was a lean 2-for-19 from 3-point range, relying heavily on the long range game. It got tight in the third, as Towns County saw a 9-point lead of 37-28 close to 42-40 after Hancock got hot with 3 straight triples. That was highlighted by a rare 4-point play that got Hancock back in it. It was 45-40 going into the final frame.

McTaggart got hot in the second half, and Kyle Oakes hit back-to-back layups in the fourth to push the lead to 49-40. After a clutch HC 3-pointer, Collin Crowder made good on 3 free throws to push it back to 9 with just over 6 minutes to play. A 7-2 Hancock Central run closed it to a 4-point game with 4:29 to play.

In the final seconds, Hancock got off 3-pointers and missed them all, with Towns getting the ball with a 64-57 lead and only 25 seconds to go. A 3-ball from HC made it interesting with 6 ticks to go and a 64-60 game, but the Indians held on for the win. Hancock Central was an abysmal 9-for-40 from outside. Meanwhile, Towns attempted and missed all of its 7 tries from deep, and relied on penetration and inside scoring, outpacing HC in the paint by a 44-18 margin, and 18-12 in second chance points. There were 5 lead changes and 8 ties throughout the contest.

Towns County’s biggest lead was 9 points, and they led a total of nearly 26 minutes of the game, while Hancock led for only 1:23 in total.

McTaggart led with 22 points and 12 boards, Moss had 14 points, 14 boards and 2 assists, while Crowder closed shop with 12 points and 9 boards. Aidan Berrong and Oakes both finished with 8 points.