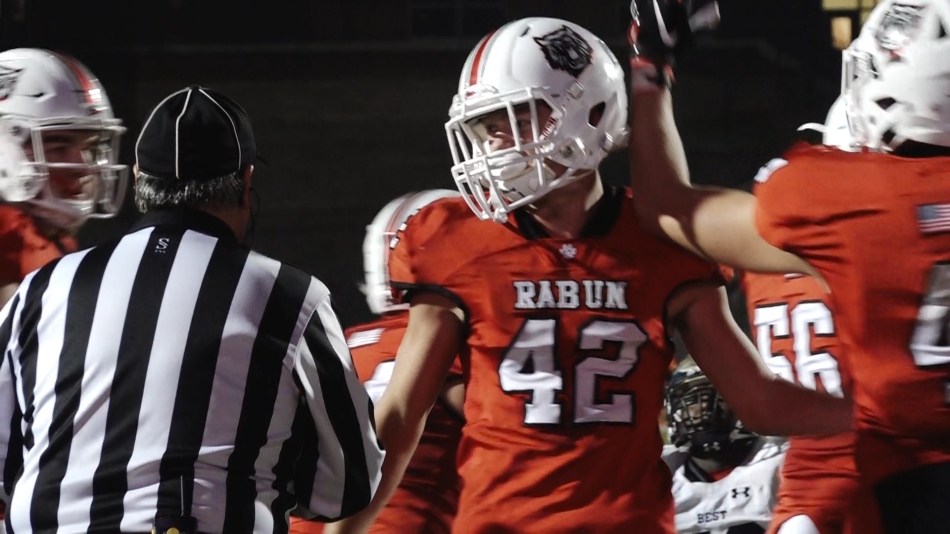 No surprise here. The #1-ranked Wildcats opened the 2A state playoffs with a blistering 38-0 win over BEST Academy. Rabun’s Gunner Stockton accounted for 4 TDs in the win, with a pair of passing scores to Braxton Hicks. The Wildcats (11-0) found themselves up 17-0 after 24 minutes of play, and cruised to the finish line with a running 4th quarter clock.

The defense was lock-down, registering 3 takeaways and holding the Eagles to zero trips to the red zone. The Wildcats got on the board on the opening drive with a 35-yard field goal by Edwin Diaz. After BEST turned the ball over on downs, Stockton connected with Sam Adams to set up a 27-yard strike to Hicks for the 10-0 lead.

Stockton then notched a 4-yard TD run early in the second quarter to push the lead to 17-0. Both teams swapped empty drives through the rest of the half, although Garrett Bragg came up with a big interception just before the half.

Rabun pulled away in the 3rd with a pair of touchdowns, including a 44-yard TD pass from Stockton to Hicks on the Wildcats’ first drive of the half. With a 24-0 lead, the defense held again and Rabun capitalized on good field position, as Stockton rushed one in from a yard out to go up 31-0.

After a Bryson Addis fumble recovery deep in Eagles territory, Stockton came up with a big run, followed by a nice pass and catch to Tate Ramey to set up a short yardage TD run by Cory Keller to cap the scoring at 38-0 with a running 4th quarter clock. Hoff Windham added an interception in the final quarter as well.

In all 3 meetings (all playoff games) against BEST Academy, Rabun has outscored the Eagles 128-22. BEST was significantly late to arrive at Rabun, as the game was delayed to an 8:40 kickoff with reported bus problems for the Eagles.

In the win, Stockton continued his climb atop the state leaderboard in terms of single-season history in passing yards and passing touchdowns. He entered with 2,650 yards, and closed in on his first 3,000-yard passing season (he had 2,917 last year). He also neared 40 passing scores (now has 39) on the year, besting his freshman season total of 34. His 40th passing TD of the season will make him one of only 26 occurrences in state history where that milestone is hit, following the likes of Deshaun Watson and Trevor Lawrence (who both did it 3 times) and former Rabun great Bailey Fisher in 2017.

Braxton Hicks notched TDs number 10 and 11 on the season, putting him among elite company with 3 consecutive 10-TD receiving seasons.

0 comments on “Wildcats stifle Eagles in first round win [VIDEO]”