Brooke Barrett has patiently waited for her moment to shine. In the final moments against Coastal Carolina on September 20, the Georgia Southern sophomore from Towns County (Class of 2018) showed why she is more than deserving of her playing time. The forward found the back of the net to break a scoreless tie and give the Eagles their fourth win of the season.

To date, Barrett has taken only five shots this season, scoring the one. However, the game-winner is something Barrett will long remember.

“It felt great to score and was a nice way to start conference [play] off,” says Barrett of the clutch goal.

The former Lady Indians star is currently 17th on the team in minutes played, and has started in four of the eight games she has appeared. Entering October 7, GSU has played 11 games.

In her one-plus seasons for the Eagles, Barrett owns two goals on 11 shots (6 on goal). She played 382 minutes as a freshman in 2018, and now has north of 550 total minutes. Both of her goals are game-winners. For Barrett, staring only five times out of 21 career games played is a stat that will continue to trend in a different direction.

“It’s hard to wait your turn,” she says. “But you have to work hard every day and know your time is coming. It’s about the bigger picture, and the team goals.”

For Barrett, the transition from playing high school to D-I level is about what you would expect.

“The level is a lot higher in college,” Barrett states. “The intensity and pace is a lot faster. Going to practice and weights is critical. There’s always room for improvement, so working on your own and getting touches in on the ball is important.”

Barrett was the 2018 BLITZ Player of the Year, and left Towns County as the best player in school history. She scored 27 goals as a senior in 2018, and added 16 assists (a rare combo of high scoring and high sharing). He final career numbers resulted in 87 goals and 58 assists, both school records. She is in the BLITZ Hall of Fame.

Barrett’s time is coming…and it could be sooner rather than later. 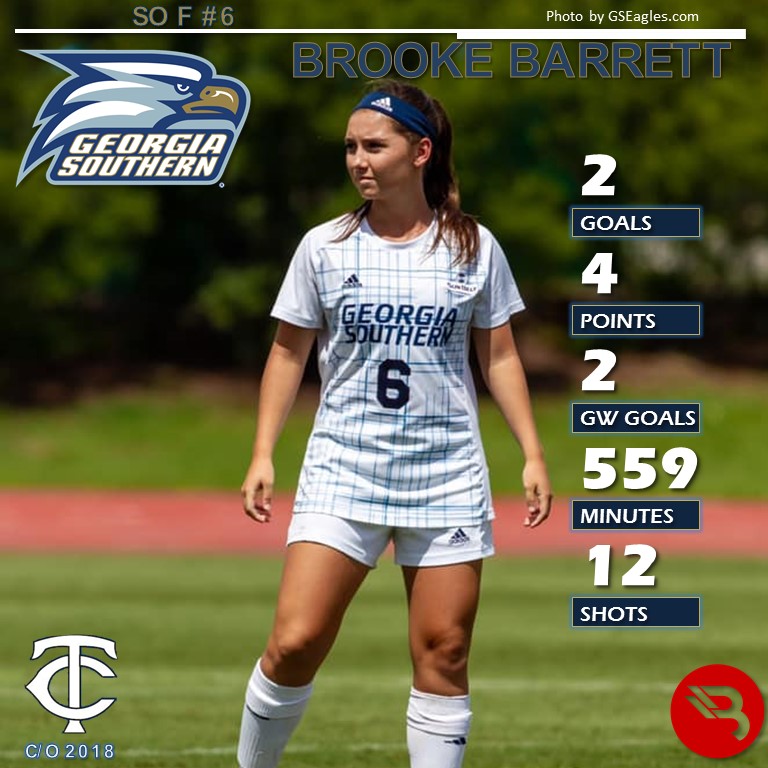