The Banks County boys defeated Callaway 3-0 in the Sweet 16 of the GHSA Class 2A State Tournament on Wednesday afternoon, advancing to the Elite Eight for the second consecutive season.

The Lady Leopards followed that up with more fireworks, also defeating Callaway 4-0 and advancing to the Elite Eight (State Quarterfinals). Coach Jim McKinney’s tennis squads are a combined 30-8 on the season.

“Both teams advancing to the Elite 8 really makes all the hard work, cold nights, and long practices worth it,” says McKinney.

“We are extremely proud of our players and their accomplishments this year. We feel we have enough fight in us to stay in the battle for the overall title. We are going to give it our best shot.” 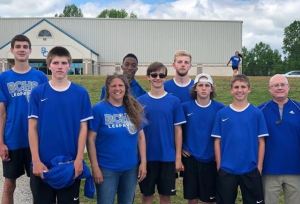 The Leopards are 13-6, finishing as the 8-AA runner-up. The Lady Leopards are enjoying an unprecedented season, going 17-2 after yesterday’s win, and won the 8-AA Championship.

NEXT UP: The Leopards advance to the quarterfinals to play #1-seed Benedictine on the road, out of region 2-AA. The Lady Leopards square off with Screven County (4-AA) in the Elite Eight. Both are number one seeds, so it has yet to be decided where they will play.