Jefferson’s Abbey Eison took the Fan Vote for Player of the Week, capturing 10,252 votes out of a total of 30,649. BLITZ then named Rabun’s Lauren Barnes and Lumpkin’s Hope Kenney Co-POWs.

Jefferson has been as good as advertised so far in 2020. Abbey Eison has been a big reason why. The sophomore striker, who also won a Player of the Week award as a freshman last year, tallied 4 goals, including a game-winner, in two matches last week. The Lady Dragons are 7-0 overall and 2-0 in region play, and are ranked #3 in the state in Class 3A.

You won’t even believe the numbers that Lauren Barnes put up. The junior striker went OFF for 11 goals and a pair of assists in just two matches last week. She was exceptional in an 8-6 high-scoring win over rivals Union, scoring 7 GOALS and assisting on the other. She followed that performance with 4 goals and another helper in a loss to Social Circle. This is her second career Player of the Week award.

Hope Kenney earns her third Player of the Week award of her career, as the reigning Player of the Year continues to re-write history. The Lady Indians’ senior striker scored 6 goals and added an assist last week, and is inching closer to that illustrious mark of 100 career goals that few have ever reached. 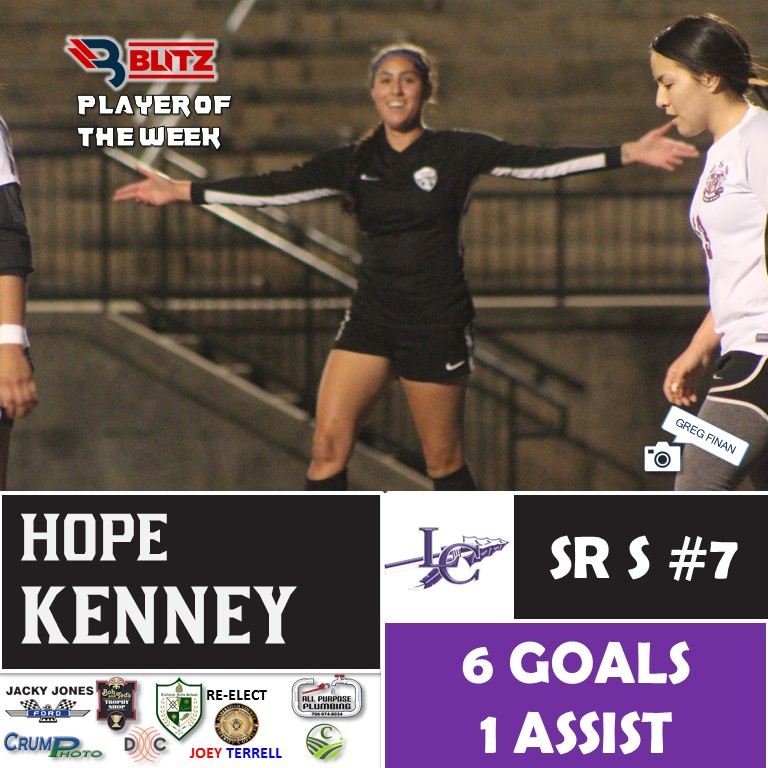 2 comments on “Eison, Barnes, Kenney light up the board, earn POW honors”