Habersham Central Raiders sophomore Jackson Clouatre ran his way to the Fan Vote Player of the Week, tallying 4,471 votes out of a total 9,957 who participated. The Dragons’ do-it-all Kade McNally earned his by entering stats in multiple categories in a blowout win.

Clouatre has taken the Raiders’ ground game by storm. Not many sophomores have emerged so quickly as a go-to back, but Jackson Clouatre has proven more than ready. He provides a great tool for the Raiders, who also have stud back Tracey Lowery (210 yds, 2 TD) and dual threat QB Tre’ Luttrell (199 yds, 1 TD).

Clouatre though has tallied 154 yards on the season with a team-high 3 TD on the ground. He’s averaging five yards per carry on 31 attempts, just one try less than Lowery’s team lead. Clouatre notched his first varsity TD in the opener against Dawson County (a 50-yarder) and has now scored a TD in each of Habersham’s three games.

In the win over White County in Week 2, he had 79 rushing yards and a TD, adding two tackles. He has 10 total tackles on the season, a pass break-up, pass deflection and one reception for six yards. 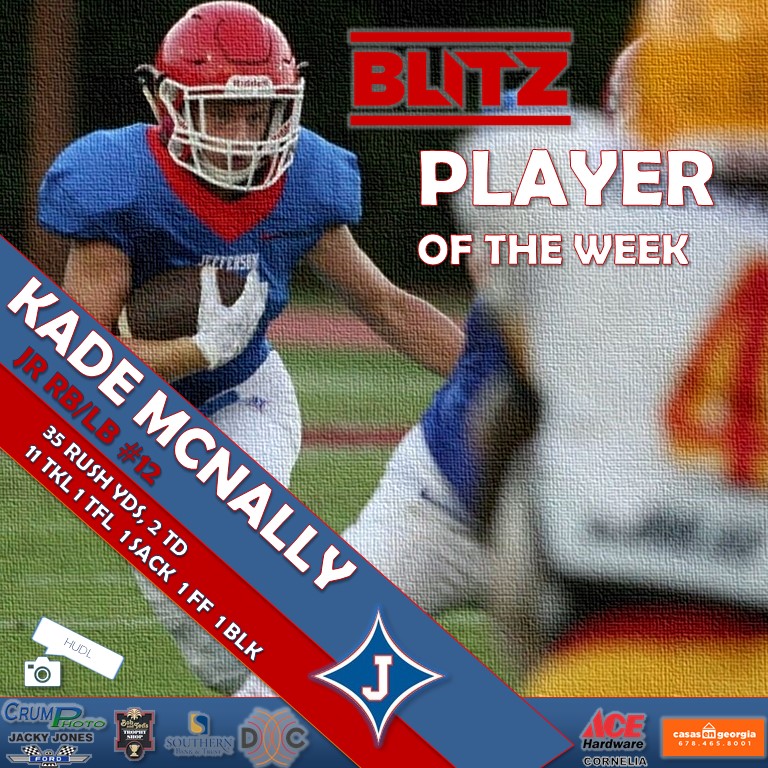 Kade McNally put up 35 yards in Jefferson’s blowout win over West Hall. If you just saw that, you’d think we were crazy for making him our pick for Player of the Week. However, if you were to see the rest of the box score, you’d realize he put up an elite stat line.

His 35 rushing yards on just five carries (7 yds/tote) produced two touchdowns, but on the flip side of the ball, he added 11 tackles (1 for loss) and a sack, and added a forced fumble….and for good measure, a blocked punt. The junior running back/linebacker has 47 rushing yards and 2 TD on the two-game season so far for Jefferson, and 19 tackles (3 for loss).