Small sample size to be sure, but we’ve got enough games in to deliver our BLITZ Softball Rankings, Mid-August edition. 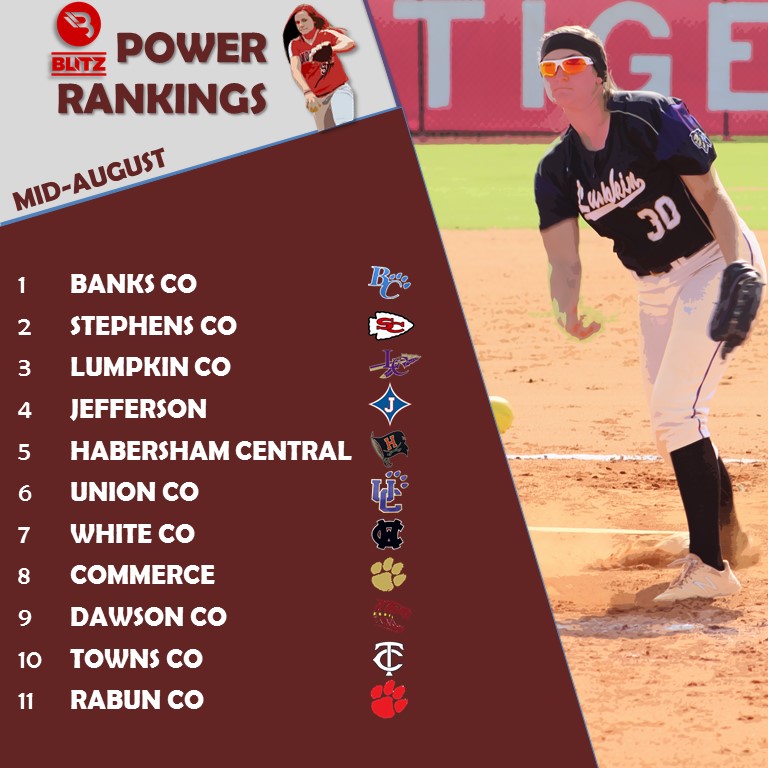 RECORD: 4-0
PREVIOUS RANKING: #1
REASON(S): The Lady Leopards are showing why #1 is where they belong. 4-0 start with tremendous showing of power in terms of homeruns. Hopefully they can’t keep this pace throughout the season. Jaycie Bowen, Tybee Denton, Madison Cronic, the list goes on for the playmakers on this team. Top to bottom, every player on the team is capable of producing.

RECORD: 3-1
PREVIOUS RANKING: #2
REASON(S): Stephens sticks here. After a 1-0 loss to start the year, they rebounded to win three straight. Senior Emma Whitfield is up to her usual dominance in the circle.

RECORD: 7-1
PREVIOUS RANKING: #6
REASON(S): WOW! Five wins in a row and a 7-1 start! Split with White County and beat Rabun and Union on our list. Very similar run differential to Jefferson (53 scored, 20 allowed).

RECORD: 7-2
PREVIOUS RANKING: #4
REASON(S): The Lady Dragons have played 9 games already…that’s crazy! They started out 6-0 before dropping two of the last three. 56 runs scored…the offense is great and pitching too (20 runs allowed).

RECORD: 4-2
PREVIOUS RANKING: #5
REASON(S): The Lady Raiders are off to a solid start at 4-2 and jump up one spot. The offense is blistering hot with all four wins coming with double-digit run totals. Hopefully Paige Cook, Adelaide Askew and others keep that going as we get thicker into region play.

RECORD: 4-3
PREVIOUS RANKING: #9
REASON(S): Almost 9 runs per game for the Lady Panthers! Are you kidding? Aladriel Arnold is a huge reason why they jump three spots. Most of those runs came in a 22-run and 15-run effort, but still. They’ve split with Habersham, beat Dawson, lost to Lumpkin and beat Towns on our list.

RECORD: 2-3
PREVIOUS RANKING: #8
REASON(S): The Lady Warriors have won a couple of good games against Dawson and a very good Lumpkin team, jumping one spot. They score a good amount, but also give up more than they’d like.

RECORD: 2-4
PREVIOUS RANKING: #7
REASON(S): Dawson has lost to White and Union on our list and have had a hard time scoring runs (27 in 6 games).

RECORD: 1-1
PREVIOUS RANKING: #10
REASON(S): Smallest sample size of all on this list, and very different results. 15-0 loss to rivals Union, but then a 15-14 win over Providence Christian. Pitching needs help, but the offense can be on or off.